The Westminster Kingsway College “Supported Internship” Programme is a work-based alternative provision for young people aged 16-25 with Special Educational Needs and/or Mental Health Needs. Knowledge Quarter partners are encouraged to host students, like young Otis here, and engage in this exciting and rewarding project. Find out how to get involved.

The Westminster Kingsway College “Supported Internship” Programme is a work-based alternative provision for young people aged 16-25 with Special Educational Needs and/or Mental Health Needs. Students are based in college 8 hours a week to develop their English, Maths and Employability Skills. They then spend a minimum of 5 hours a week on a work placement where they are assisted by a Job Coach who supports both the student and the employer. Support is tailored to the students’ needs and can range from mentoring to job carving to hands-on support.

WKC offers a wide range of opportunities to students and employers, ranging from catering to retail, from childcare to business and admin. Knowledge Quarter partners are encouraged to host students and engage in this exciting and rewarding project. The programme provides many benefits for employers, including:

• Gain a determined and reliable new member of staff, trained specifically for the job role
• Create a diverse and inclusive workplace culture
• Improve corporate social responsibility and positive PR
• Fully government-funded at no cost to the business

For any information and to join the programme as a student or employer, contact the College via supportedinternship@westking.ac.uk Otis joined the Supported Internship course at Westminster Kingsway College in September. He has always been open, with other students and college staff, about his background; Otis is autistic and has a diagnosis of bipolar disorder, Multiple Anxiety Disorder, and Obsessive-compulsive disorder. Despite being anxious about returning to an education setting, Otis got involved straight away with enthusiasm in every lesson. He worked hard towards achieving a Maths and English qualification, and participated actively in any discussion and group activity, always offering his point of view in a diplomatic way.

Due to his commitment, his ability to listen and his positive attitude, he quickly became a point of reference for other students and was elected class representative. In this role, Otis was able to liaise between students and staff and to raise important suggestions, for example about improving the variety of food in the college canteen. Subsequently, Otis became a Faculty representative, a role that brought him to attend meetings with the college principal and senior management. Otis also represented the college during open days, where again he was praised for his mannerism and the help he was able to provide to prospective students and their family. Recently he was also nominated for Student of the Year due to his ability to overcome barriers and difficulties.

Otis dedication to improving reflected especially in his work experience. Otis joined The Alan Turing Institute, based at the British Library, as Facility Assistant. In the past seven months, he made a great impression within everyone in the organisation and is expected to secure employment by the Summer.

This is a feedback provided by Sharmila Ryall, Otis’ manager at The Alan Turing Institute:

“Otis is doing a fantastic job and has such a positive impact on both the organisation and all the people who work within the Institute. He has gained so much confidence and taken on many additional tasks over the past few months. I am really impressed with how well he has coped with challenging situations. He has a lovely warm nature and good customer service and communication skills. He always goes the extra mile to make people feel welcome and brings a smile to those who interact with him. We are very lucky to have him in our team.”

In Otis’ words, Westminster Kingsway College and the Supported Internship programme has opened up many opportunities and has given him a sense of belonging and purpose. More importantly, the opportunity to engage with employers helped him develop as a person. Otis has been and he continues being a source of inspiration for many around him, either students, college staff and colleagues. The College is extremely proud to have Otis as a champion and ambassador for students and staff at Westminster Kingsway College. 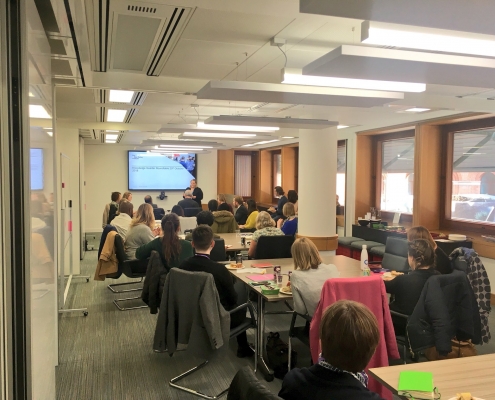 November 20, 2020
Do you work in HR? Have a passion for improving diversity in the work place? Then get involved in our Diversity Roundtable series, a bi-annual meet-up of professionals working in the Knowledge Quarter at which you can openly discuss achievements and challenges and share best practice.
https://www.knowledgequarter.london/wp-content/uploads/2018/11/4.jpg 1536 2048 KQ https://www.knowledgequarter.london/wp-content/uploads/2016/03/kq-icon-2016.png KQ2020-11-20 09:35:472020-11-20 09:35:43Knowledge Quarter Diversity Roundtable

Job Listing: Head of Children and Young People’s Reading at The Reading A...